Okay, at this point, we can start modifying the actual Guitar Hero 3.iso file. Take your Guitar Hero 3.iso or Guitar Hero Aerosmith.iso and drop it in The Ghost's folder called 'discs.' Then, open up TheGHOSTWiiIsoTool.exe. In the window that comes up. We need to add the correct files to the blank fields. Look at the pictures below. Drag the .iso to the field ISO:, and drag the actual folder called 'temp' to the field Working Folder: and select Wii GH3 or Wii GH Aerosmith depending on which version .iso you are using.
Next, go to the drop-down menu Presets: and select Compact ISO, and hit set. Then, scroll down into the area below where it says 1. Audio Blanking. Scroll down until you see 4. File Editing. Change RemoveUnusedFiles, RemoveUnusedLanguages, and RemoveUnusedPartition to Yes by clicking on No, and then the arrow to the right. Once that's done, you can change other settings If you know what you're doing. If not, I highly recommend leaving everything else alone (including the disc ID) so that we can be sure the ISO tool will work. The less variables are added to the process, the less can go wrong. After that, go to the bottom of the screen and hit Prep ISO. This will take a LONG time. Not three hours, but 20 - 30 minutes on a 0.9 GHz processor with 2 GB of RAM. It should work much faster with a better processor and more RAM.
NOTE: The ISO tool may (and probably will) stop responding and look frozen during the process. JUST BE PATIENT. Only kill it after it hasn't done anything for an hour. Even then, it may just be slow.

These are the things you will need:
+ 'TheGhost.rar'
+ 7-zip
+ A Guitar Hero 3 or Aerosmith .iso file
+ XP-codec pack
+ 2 to 4 GB (or more) of free disk space
For those who don't know, The Ghost comes as a .rar compressed file. I know that links die, so after a while you may need to just search Google for the .rar file. But for now, get it here or go to the Ghost's homepage as shown on the Intro page of this instructable.
You will need 7-zip (which is free) or another program that can decompress .rar files like WinZip to open 'TheGhost.rar' Get 7-zip here. Go for the first or second .exe file, and then install it.
Ah, the .iso. Again, this must be obtained legally!!! You can get the actual .iso file from your very own Wii and not by torrents by following the wonderful guide by thundaboy here (also on the intro page). After reading his guide, you can extract the actual .iso from an external hard drive or flash drive with WFBS Manager. Ask him for help with this, not me.
The XP-Codec Pack is strictly for The Ghost, and is probably the easiest to get. A codec is a small file
stored in C:WINDOWS that lets your computer play and make music and video files. In this case, we need to be able to handle .ogg .wav, and xbadpcm files. Get it here, and then install it.
Finally, you need a good amount of disk space to run The Ghost. It manipulates song packs, reads data partitions, deletes video cores, converts audio, etc. and needs a good deal of temporary space to do this.
Once you have installed the XP-Codec Pack and have the .iso file, you can move on. 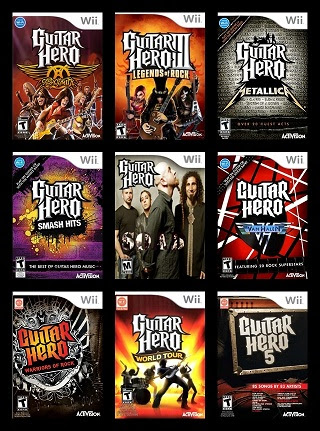